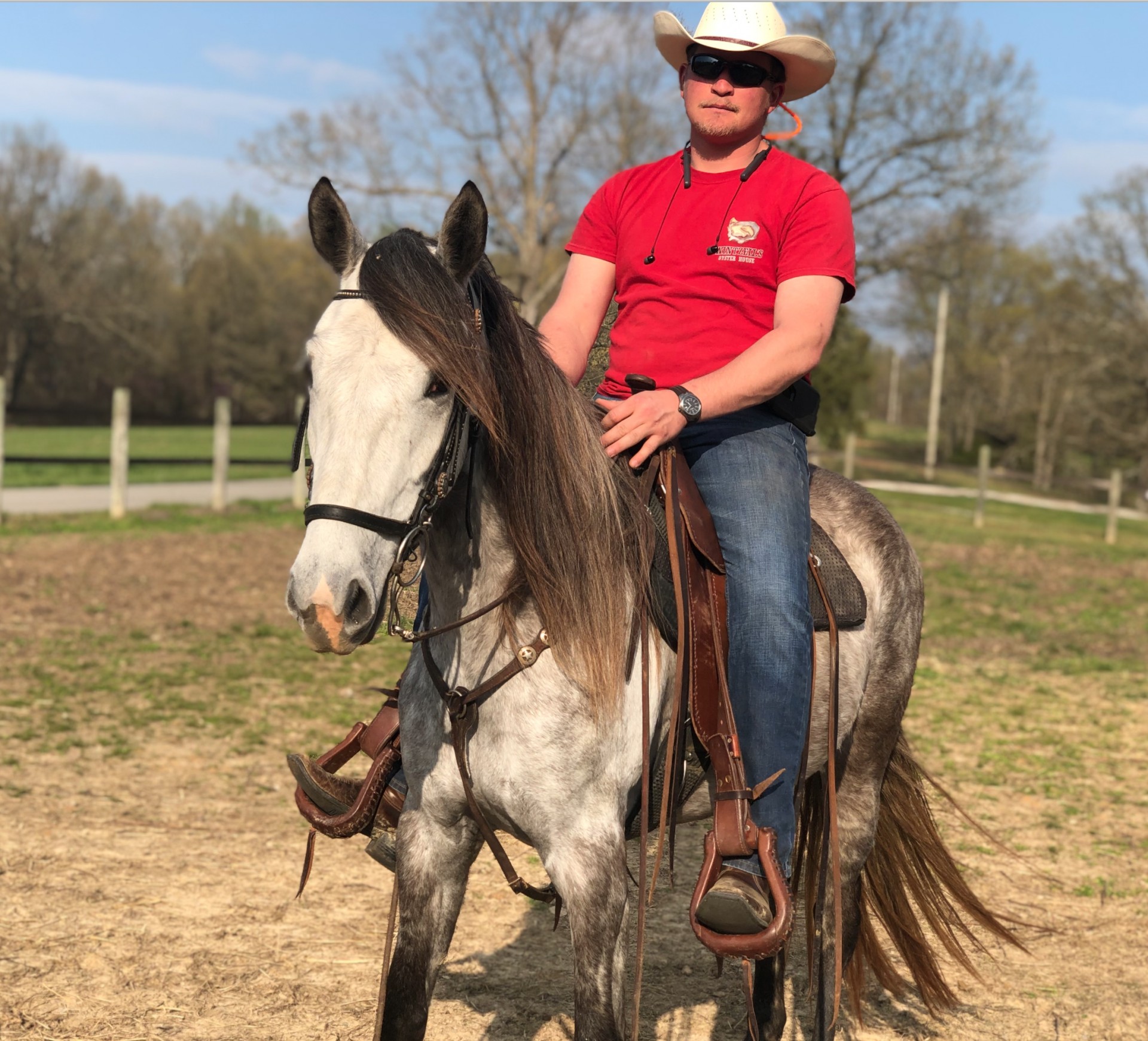 4 Year Old Grey Mare For Sale with beautiful flat walk and color that is simply unbelievable.  She has a very nice personality to go with it and has had some training but will go into our spring trail riding course as soon as the country gets back to normal here in the USA which should be in May so she will be available around June for purchase.  This mare breaks our standard mold as do her 2 buckskin sisters as they are not by world champions but we wanted some color to play with last year and it has been fun to see plus they are so beautiful.  This year the dapple grey on this mare alone is simply gorgeous to look at and her sisters are shedding out a dark golden buckskin color that I'm not used to!!!  So a break in standards is good upon occasion I'd say.   If you are looking for a little color and style on the trail then you should consider looking at this mare here at Genesis Tennessee Walking Horses in Kentucky come Summer 2020!

Girl on Firea by He's Puttin gon the Ritz 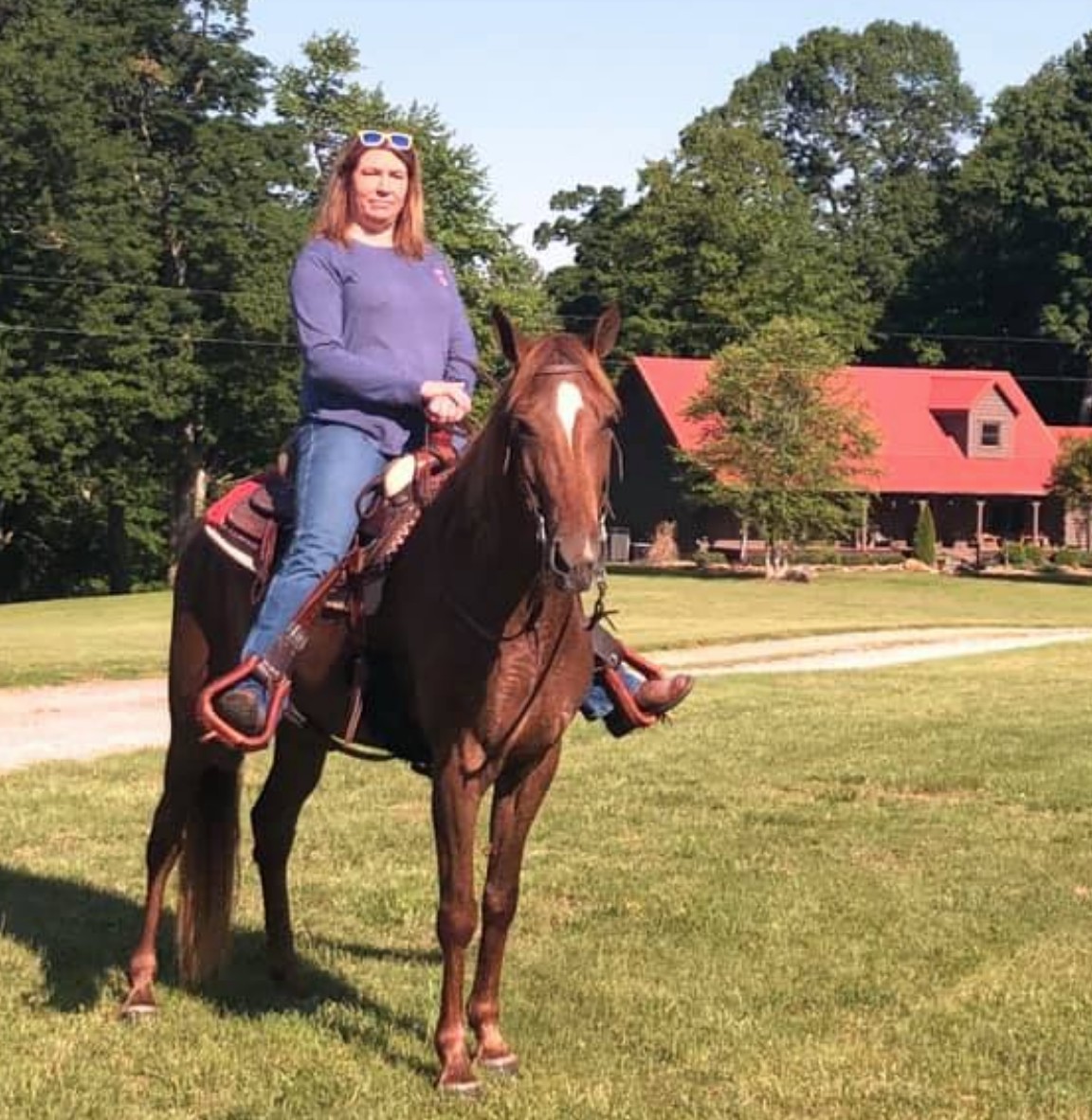 Some matches are "meant to be" and that is the case with this tall glass of water and Anne.  Ritzy is by WGC He's Putting on the Ritz and stands over 16 hands tall so it's a serious conversation when you stride up there to get on her.  Luckily she is calm and laid back.  I don't know that I've seen another Ritz mare that calm but when they let me literally drag myself up there it's something to watch!  (I have videos that have sold horses with those videos!)   With knee replacements and bones that ache, it hurts when I start crawling up there. :)

When Anne came down to Kentucky looking for a riding horse, she wanted calm and a match for her in personality.  It ended up it was just that!  They rode all over the farm and it was as if she was made for her.  I've received photos from her letting me know that Ritzy is settling in up in IA which is always great to hear and that their first trail ride was a blast. **As a bonus, we now have horses in 27 states!!

Some horses you raise and train and it is an exciting journey other are beautiful and go through your life one after anothers and still others are intrinsic to your life like Decadent Delilah Cash.  This mare was a super big deal as she was born right on the farm and bought when she was a couple of days old by a dear friend.  It solidified my future riding buddy as we watched her grow into her feet and she bought more horses to breed for her farm down the road.  It built some lasting memories that are forever etched on my heart.  I still remember that conversation "Now, Char....whe's cute now but she'll get bigger.  Then when she was bigger that THINK Big talk.  You know the one, anytime you want space..........THINK BIG with your arms waving and she'll remember you're the boss!"  When Delilah was 2 we sent her off to be trained and then the riding we did was AWESOME.   When Charlene was finally ready to sell her and stop riding, it just about broke my heart and I drug my feet admittedly Sorry Char!  But knew it was the end of an era and I’m not sentimental but I’ll admit it....I cried as she pulled out!   Good news is she left with a great couple who actually came to buy our trailer!   It was meant to be and Good Karma. Part of the healing process. They are coming at Wranglers in October so that’s great. From Fayette MO.  Another relationship made and friend in Missouri. 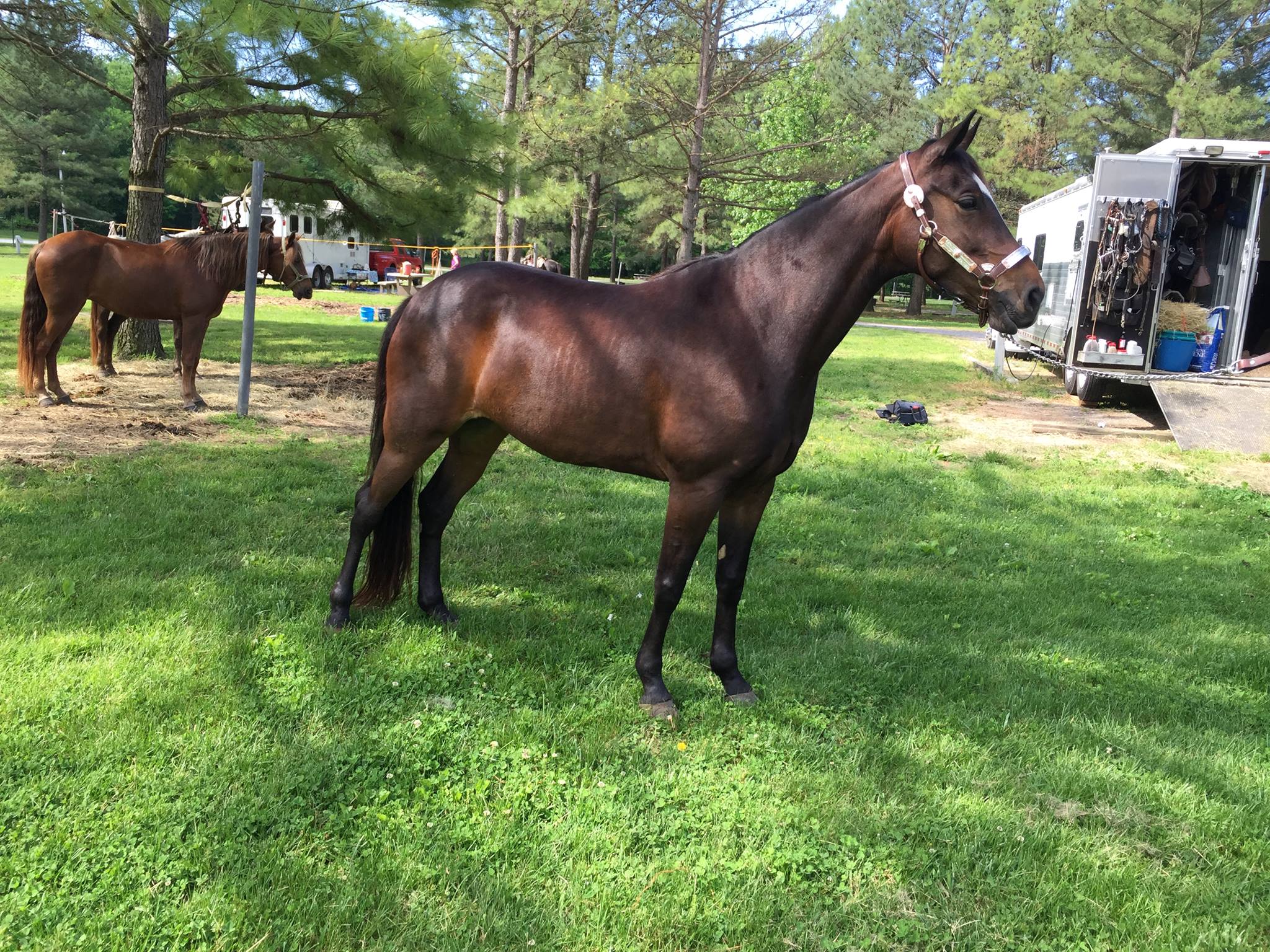 She is unique and has a personality that will not be pigeon holed. She is inquisitive but not in your space. She enjoys the attention but doesn't always want you to know how easy she is. Leads and loads easy. Takes a bath and haircut without any issues and I mean tied to the trailer not cross-tied. She is ready to go when she's mounted as her DNA is set to be task oriented and she knows its time to go to work. Her head is bowed beautifully and she looks like she is going into the ring. She travels really nicely even with 3 shoes on in the mountains which should be uncomfortable and it wasn't amazingly smooth but it really wasn't bad either so that was great as we were there several days without a farrier. 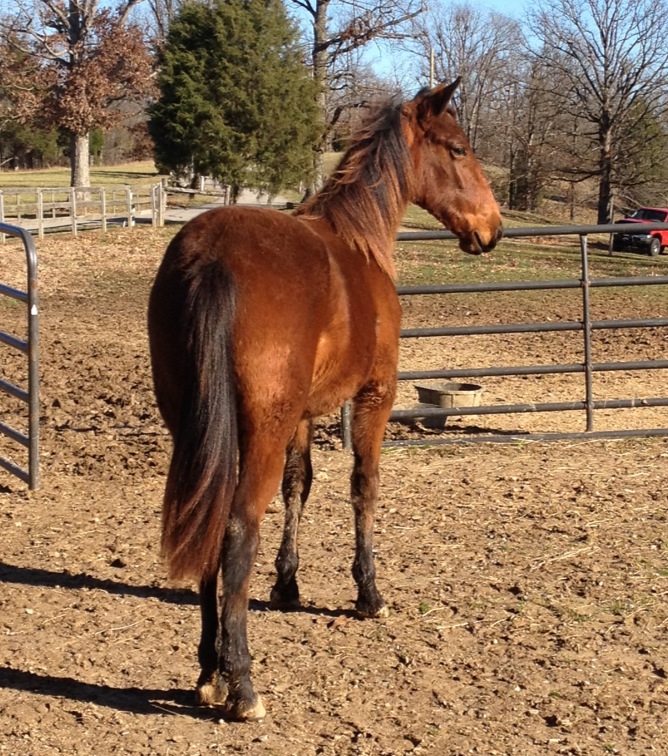 CONGRATULATIONS Spencer Benedict Stables.  This mare is returning to her roots.  The dam originally came from SBS and we bought her with the filly on her side bred by Carrie Benedict. Perfect combination and I'm glad to see her going back to Glasgow.  Can't wait to see what she does next. 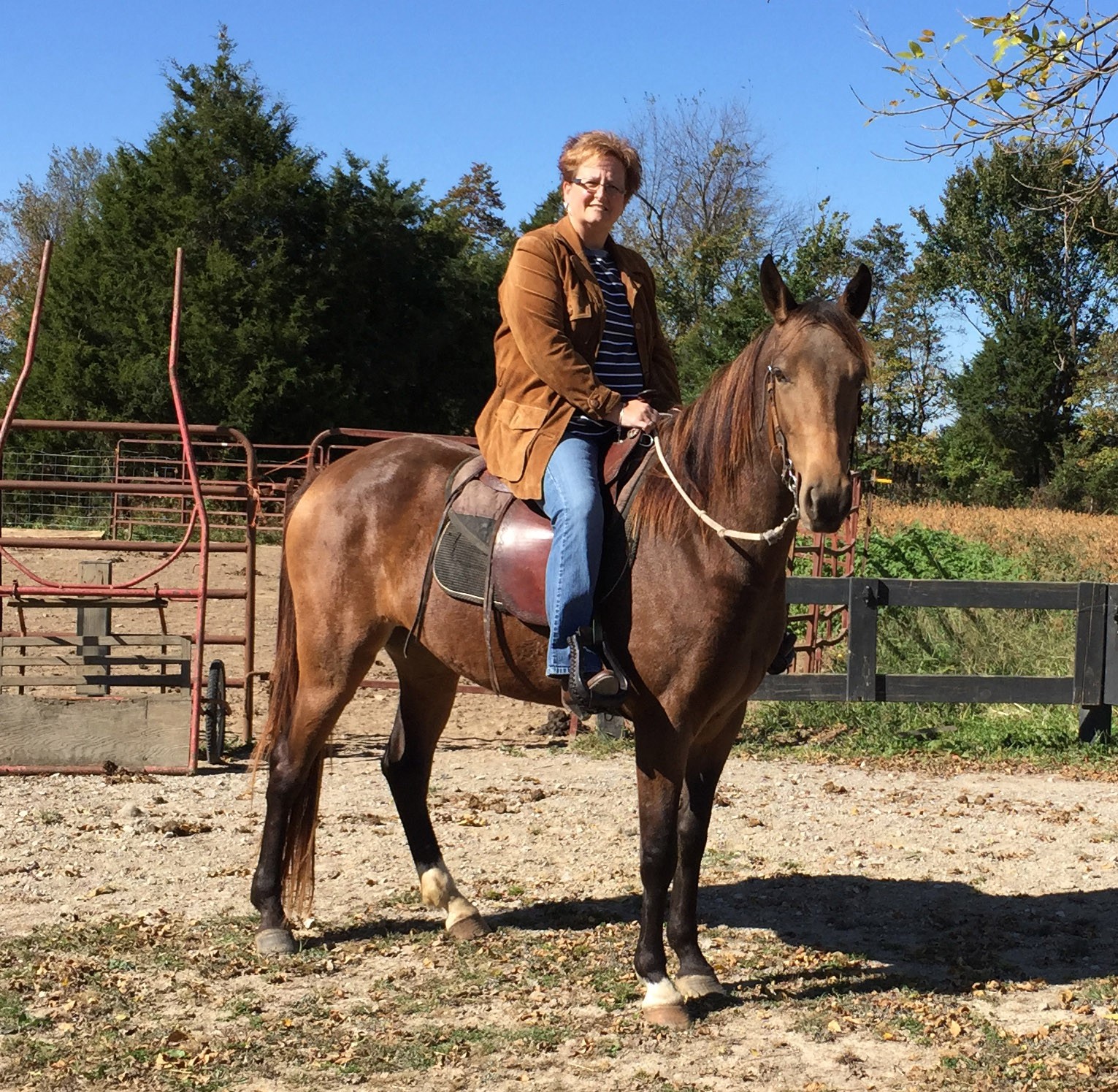 I don't think she will last long.......This mare is just perfect for anyone who is ready to ride and just wants to enjoy the day. She is calm, laid back, easy to work with and more importantly IF you want speed, you have to ask for it. There is no tugging and holding her back. NO moments of feeling the danger of a horse ready to bolt under you. Build up your confidence and do it on a horse that looks great and rides smooth.  She has a just a little speed when asked and has no issues riding alone.  I typically (well never) have a horse here at the farm without a blue blooded pedigree but couldn't resist this mare. She has the kindest eyes and just a soft approach. Boogie or BB as I call since I am a BB King fan is simply easy to spend the day on. She requires little to no work and you can put just about anyone up there without an issue thus far.