Snazz Has Won A Place In Our Hearts 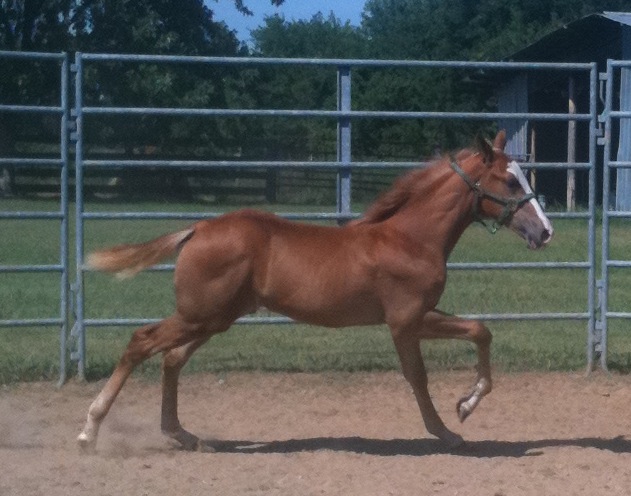 Update Whole Nine Yards Stud Colt Born at Genesis Tennessee Walking Horse Farm in Slaughters KY: Snazz from the moment he arrived has been a special horse and has crept into our hearts here at CarMil mares earning a spot at the farm with us. He has a head full of sense, is drop dead gorgeous, and a really nice walk so look for us riding him on the trails! We are training him under saddle now to be the primary mount for Charlene.

Whole Nine Yards Stud Colt Born at Genesis Tennessee Walking Horse Farm in Slaughters KY: Elegent, Talented, Beautiful, and Snazzy really sums up this chestnut stud colt.  His tail is white, he has a gorgeous blaze, small ears, defined head, long legs, personality, and by the Whole Nine Yards and our Skywatch mare. We have named him Carson's Snazz9 (Snazz9 for short) in honor of my partner at CarMil Breding's husband who was so supportive of our farm program.  He was not a horse enthusiast like Charlene and I but enjoyed feeding the horses, watching the babies, and making sure the water was fresh and cool for them.

We are excited to see this first CarMil mare foal hit the ground striding in a 4 beat walk as our other fillies from 2010 were purchased with the mares originally. It was an exciting moment watching this beautiful chestnut mare by Skywatch deliver the colt at 9:45pm on May first. We were in the barn and able to watch the foaling which for Charlene Carson of CarMil was her first foaling experience so it was literally amazing for both of us. Snazz is doing well and has a smooth walk and kindness in manner that makes it easy to work with him in the round pen, bathing, or anything else. He would be a great choice for show or breeding with his long legged good looks and exceptional pedigree.  His stride is loose and easy with a natural shake. 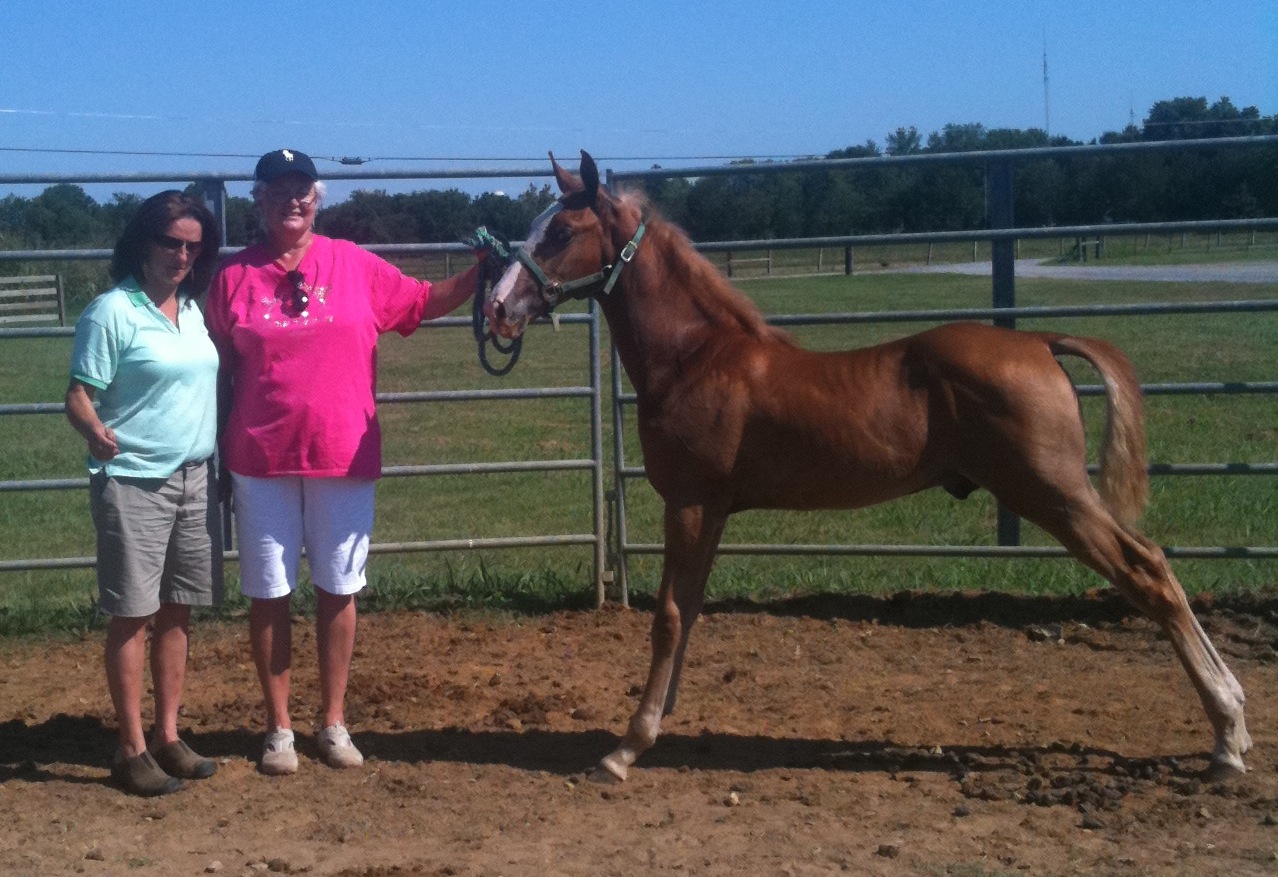 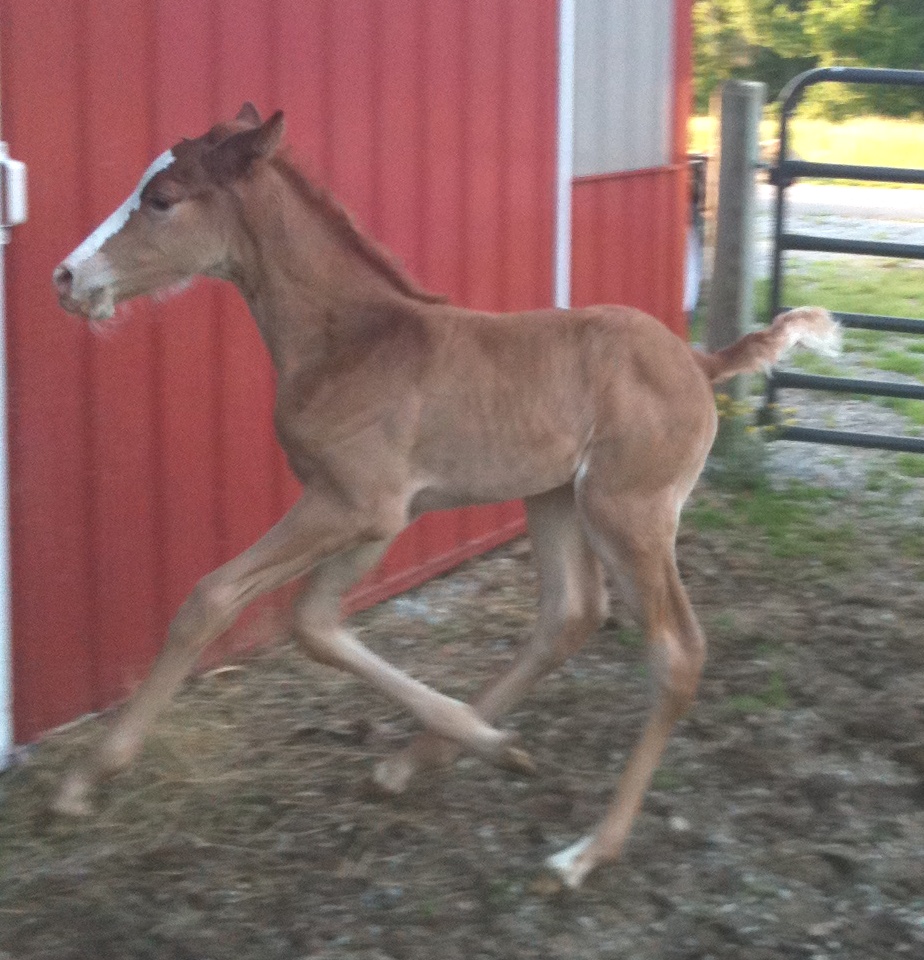 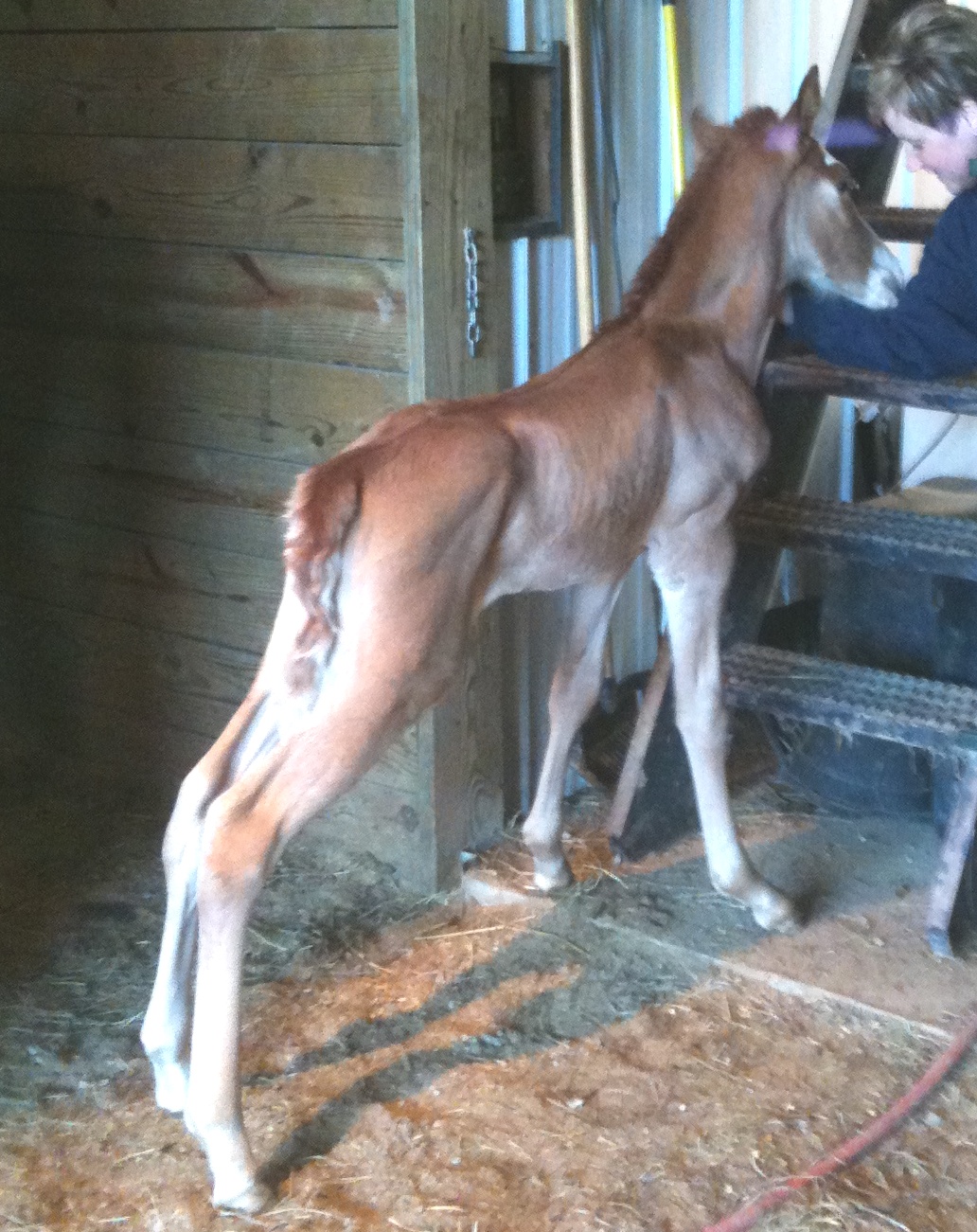 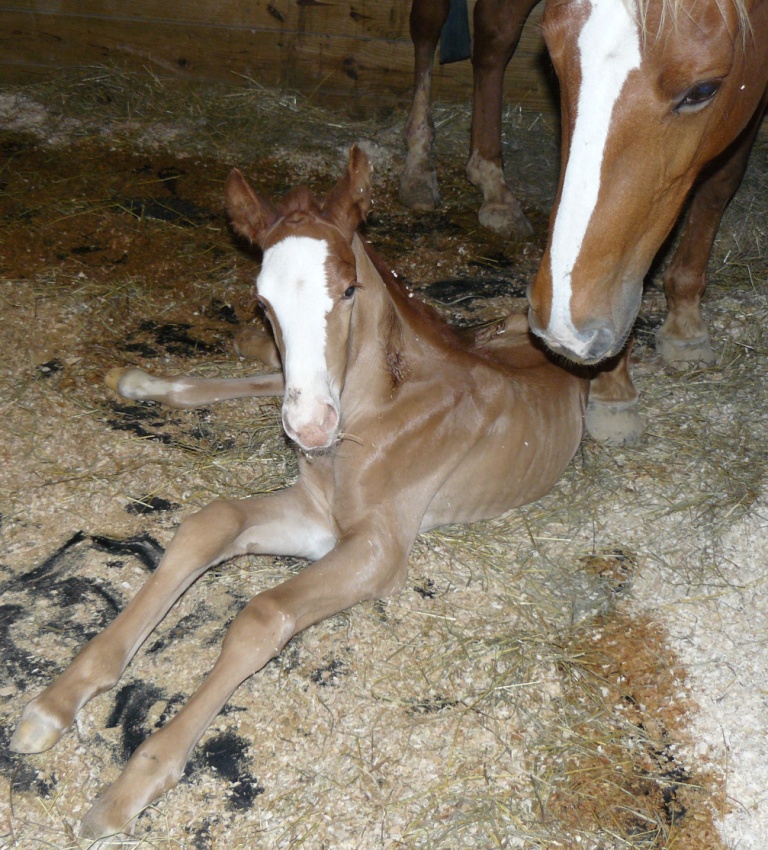 Pedigree for Carson's Snazzy 9 (aka Snazz) foaled 5/1/2011 with TWHBEA registration number pdg. and in the KWHBIF program. 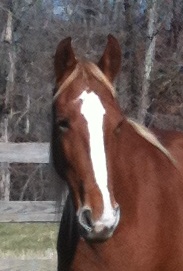 This mare is big, talented, and drop dead gorgeous. HAVE YOU SEEN A PRETTIER MARE? The Skywatch Girl has no issues in foaling and has had some beautiful babies already. She has great ground manners and is a great addition to any breeding or pleasure mare endeavor. We are taking deposits on the foal with live foal guarantee and have her 2007 mare for sale as well Mae Capone. This mare is a perfect example of what the CarMil mare program is all about breeding high quality and intelligent mares to equally talented world champion sires for the true walking horse lover. There is no reason no to ride or work with a horse that is beautiful, has world champion direct pedigree, and talented. "Sky" is in the Kentucky Walking Horse Breeders Incentive Program (KWHBIF) and has several great foals on the ground already.

2011 Carson's Snazzy 9, born 5/1/2011 by The Whole Nine Yards, Stud Colt, Chestnut in Color with Flax Mane and Tail. He has a blaze and two small hind coronets.

2007 Mae Capone mare born 5/19/2007 by Capone and Chesnut in Color with Blaze and Flax Mane and Tail with TWHBEA Number 20701335. ***Owned by Genesis Tennessee Walking Horse Farm as a pleasure mare in 2010 and sold 5/2/2011 to Dale Ann Wilson who is a repeat client and referral for GenesisTWH in Kentucky.  SEE MAE HERE 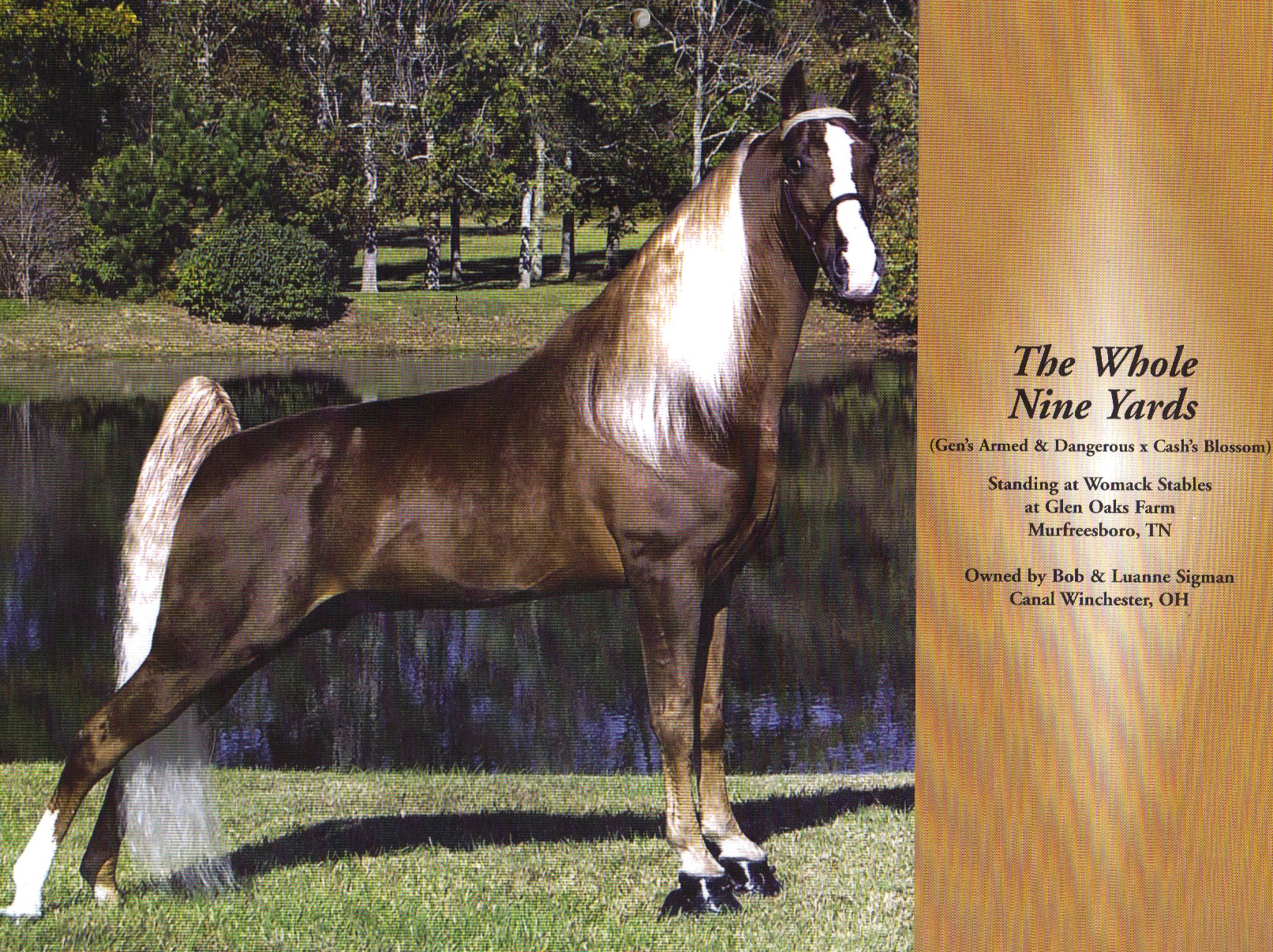 Genesis Tennessee Walking Horse Farm in Slaughters Kentucky specializes in mares by world champion sires with common sense, wonderful temperaments, and athletic ability who are a true pleasure to work with. We have horses in 26 states now and 2 overseas with a reputation for excellence. We guarantee our horses to be sound and as described. I'd love the opportunity to talk to you about our ladies. - Marion Miller (270) 339-4176 | Marion@genesistwh.com | Contact Us

We do not trade horses as our mares nor do we accept more than the asking price for the horse and pay the buyers costs for transportation costs for them. We run a fair and reputable business and I invite you to look at our Sold Horses - Testimonials.