Your mare has a tumor, what do you do? Options? Issues? 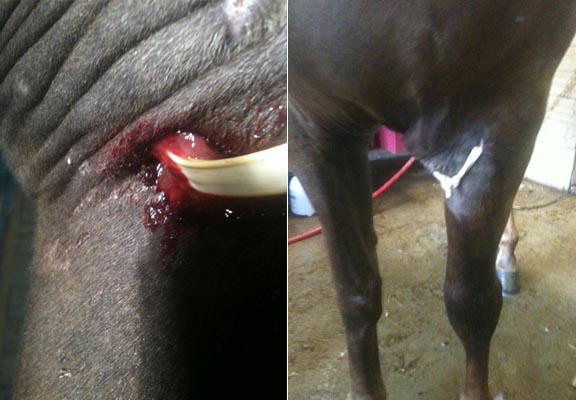 I discovered a large lump in my mare's front near chest one afternoon. No blood - No bleeding - No limping - Just a lump the size of a golf ball portruding and solid. Odd things do happen when you have a field full of mares and an injury or two is to be expected, however, when you can not see any reason for said injury it becomes a reason for concern. After much thought we decided to let it be for a week or so to see if it got smaller, had any swelling, or if there were any changes at all. There were none. It was the middle of our hot summer season so we didn't ride often and where it was located you wouldn't really have noticed it had my daughter not been in from college and wanted to ride for an hour or so. We saddled up and rode and the mares both did great but my mare seemed to be a hair off stride meaning she just didn't feel right. If you have a really good mare that you are close to, you will understand what I mean.

When we got back to the barn and untacked, I wondered if she just didn't feel right or perhaps she needed new shoes, but she didn't act any different so I did a cursory inspection of her feet and rubbed her down which is when I ran my hand over the lump. This lump was the size of a ping pong ball and very much felt completely round. Now I was immediately wondering why I didn't see it earlier? When did it happen?  What was it?

After 18 years of raising and training mares I have found a mare that suits my needs in all areas. Her personality fits mine perfectly. Her gait is exceptional at all levels including a racking speed. She has a refined and classic head and conformation.  he is by what I consider the best sire in the walking horse industry: Jose' Jose'. What do I do?

There were no contusions, scrapes, bruising, scuffs, or any other type of issue I could find anywhere near the spot so I knew it wasn't injury based and figured maybe she 's allergic to a bite from a large bug or spider of some kind. I kept a close watch for any changes for 2 weeks then called our local vet to look at it. Now you must remember that there were still no other issues or visual aids to help us determine what this was and he was thorough, but didn't see it was an issue, just keep an eye on it. I did so for another 3 days then could not stand it and called in our regional expert vet Dr. R.H. Stone III, Stone Ridge Equine Care  1-812-867-7330 in Evansville to come over who we use for all large issues or non-typical injuries. Dr. Stone brought his ultra sound machine and did a thorough exam finding the mass, but nothing in it or around it which concerned him enough to say we needed to cut into it and remove the mass for testing. Now I'm terrified as he does not say that lightly. A mass of that size should be the result of some trauma and as there was none evident and he didn't know what he would be getting into so the surgical wing of his clinic is where we took her that evening.

The next morning when he did surgery on her, he found that it had been the right call to not try this at the farm. He ended up cutting out what was a 2 inch round mass from deep within her arm pit which had a tubular feed going to it from a main artery that was as big as a pencil shaft. It was something he had never seen before so we sent tissue samples and blood samples to several leading clinics and labs in the country to find out what this could be. It was not a cancerous tumor, thank God! That news was quickly found but noone had seen anything like it. The best we could ascertain from all opinions gathered is that this issue had been the result of a very hard trauma to the horse by something with a great deal of force behind in her past "before coming to GenesisTWH - we do not condone violence, good behavior yes but not violene". The tumor had been growing since that time via the feeder tube from the artery and when it came up where we could see it the circumference was a defined mass. As it was in such an odd place, it wasn't something we would have seen much earlier.

Now how did Margorita do through all this and is she OK?  She is a champion as well as a princess. This mare did not limp or act badly at any time and has such heart.  Now she did swell up like an elephant but even then she did not limp and was a more than wonderful patient. We waited 6 months for her to heal up which was about 10 weeks more than was suggested but I didn't want to take any chances and on our first trail ride she was tentative but walked on slowly like I wanted her to. Then to my amazement she decided to walk on and just kick up her heels and while I was concerned at first, her enthusiasm was something I embraced as I knew she was fine at that point.

Since the day I laid eyes on her, I felt she was special and the right horse for me. Not the flash of chrome that I ordinarily prefer, but she is elegant and beautiful with a personality that knows no boundries. Worth every penny and trip to the barn and I'm am very blessed to have such a great companion in the barn. This is the horse of a lifetime.

Genesis Tennessee Walking Horse Farm in Slaughters Kentucky specializes in mares by world champion sires with common sense, wonderful temperaments, and athletic ability who are a true pleasure to work with. We have horses in 26 states now and 2 overseas with a reputation for excellence. We guarantee our horses to be sound and as described. I'd love the opportunity to talk to you about our ladies. - Marion Miller (270) 339-4176 | Marion@genesistwh.com | Contact Us

We do not trade horses as our mares nor do we accept more than the asking price for the horse and pay the buyers costs for transportation costs for them. We run a fair and reputable business and I invite you to look at our Sold Horses - Testimonials.